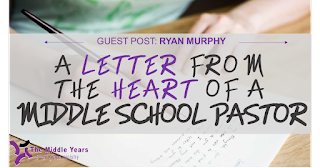 My name is Ryan Murphy and I am the Middle School Pastor at Osborne Baptist Church in Eden, North Carolina (you can read this in a southern twang because that’s how I would say it if we were talking face-to-face). We’re located in a “smallish” town close to the Virginia state line.

I prefer talking about middle schoolers more than myself so I’ll move on… Dan asking me to write up something short, short being the keyword, saying “Why Middle School Ministry Matters.”

That’s like asking me to explain why I love Star Wars in two words…it’s next to impossible…but I’m going to give it my best!

Our local schools have middle schoolers broken into 6th-8th grade so that’s reflected at our church. Those three years are some of the most fascinating years I’ve ever seen. They are full of awkward conversations, body changes (which they hate talking about), first crushes, ENERGY!, farts (at the worst/funniest times), burps, regretful decisions, rediscovering boundaries, attitudes with authority and so much more. Most of the time when I tell someone I work with middle schoolers by choice, and not by force, I get the look like someone has just seen Santa (“WOW! People like that exist!”). When the truth is, it’s very difficult for me to imagine doing anything else.

One of the things we say a lot at our church is, “everything is personal.” Everything. I could give a lot of reasons why I believe the middle school years are important. I could quote books. I could talk about research organizations have found. However, if I’m honest, I believe the reason I love working with middle schoolers is personal for me. You see, middle school was extremely hard for me. I started a new school in a new school district which meant I didn’t know anyone. We started attending a new church around that time. I never could quite get the feeling that I had a place I belonged. (To be honest, it was probably my own fault.) I remember desperately wanting a place to belong.

Of course, for the sake of time, I am leaving out a some of the details. But I look back at those three years as some of the hardest I had. Middle school is probably that time for a lot of us that we would never volunteer to go back to.

That’s why I love middle school ministry and why I believe it’s so important; because it’s
personal. 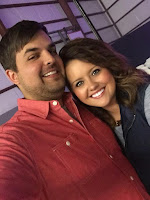