News U Can Use: “Middle Years Age Meghan Markle Got Company to Change Its Advertising” 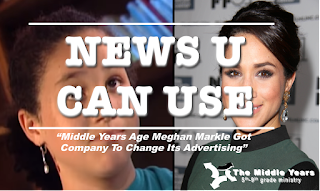 “ People are working hard to dig into the soon-to-be newest member of the Royal family to see what she was like before she met Prince Harry or even appeared in the smash legal drama Suits.

Well before she was portraying Rachel Zane, or even any on-screen character, Meghan Markle was making headlines around the US when she was just 11. The young Meghan couldn't believe her eyes when she watched a series of commercials which all seemed to have the words 'women' and 'cleaning' in the same sentence. One ad in particular stood out to the 11-year-old, which was for Ivory dish washing liquid because it said: "Women are fighting greasy pots and pans”.

She said to the camera: "Just about one in every three commercials is going to say something that's gonna hurt somebody's feelings.”

Meghan wrote a letter to Proctor and Gamble... Click Here to Read More.