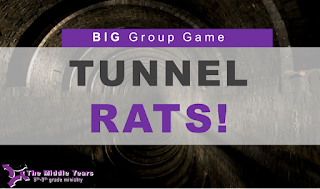 Last Thursday night at the Youth Specialties: National Youth Workers Convention “Idea Labs” area, we kicked off the Idea Lab with “Games-a-Palooza”.  It was a silly time of fun and playing a sampling of 12-14 games from our YS Core Blogger Group.

One of the games we played, was my own game “Tunnel Rats”.  Here are the quick easy instructions for this low-prep/no-prep Big Group Team Game!


SUPPLIES:
• 2 cones (*or consider using a foam “Wisconsin cheese head”, it is what I use)

Quick explanation: A combination between a race and steal the bacon. Players will have an assigned number, when their number is called they must race to the back of the line and crawl like “rats” through their team’s legs forming a “tunnel”, in order to the first person to get the “cheese” (orange cone)

Before the Game:
• No set up is needed

Playing:
•  Divide up in 2 equal teams.
• Line teams up in single files, facing forward
• Give the “quick explanation” and rules
• Give each player on each team a number from 1 to how many each players there are on each team.
• There should be a corresponding numbered player on each team.
• Place a cone at the front of each team’s line a few feet away from the first player in each line.
• Start the game by announcing a number.
• The players with that number on each team will run to the back of the line and they crawl as quickly through their team’s legs to get to the cone first.

Rules:
• Player that are crawling must go through every player’s legs.
• All players on the team must spread their legs giving the crawling player room to crawl through.
• For each “rat” (player) that get to the “cheese” (cone) first they get a point for their team.

Winner(s):
• The winning team is the team that has the most points at the end of time allotted time or rounds played

Hints/Help:
• This game is best played when everyone is wearing pants or shorts, obviously girls in skirts should not play.
• For larger groups consider 3-4 teams, or even more!
• For extra challenge after a few rounds, add a second in front of each team, and announce two numbers at a time.


Check out another great game from the YS Idea Lab:

“What Are the Odds?” from Cory Jones.