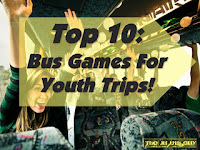 Sitting "a bored" the bus trying to come up with ways to kill time with your students on your long summer trip to camp, mission project or conference?!

Here are a couple of game I have played over the years with my ministries.  Hope they help ease the pain and bore-dumb!


10. "Statue Charades"- 2 teams divided up by sides. One person comes to the front of the bus and is given something that they have to get their team to guess by simply "striking a pose".