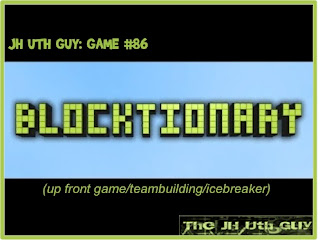 It is a quick silly upfront group game, that also can make a great icebreaker or team builder.

Here is the simple idea behind
"BLOCK-TIONARY"!

Set up:
- Have a table set up, up front with a pile of blocks
- On your index cards write out a set of clues (10-20).  Simple items that can be built or formed out of blocks and a couple more advanced, difficult items.  (* see example below)

Game Play:
- Divide group into 2 equal teams
- Each team will have a 60 second turn guessing the clue
- Choose which team will start and have one volunteer from that team come to the front
- Show the volunteer the clue.
- Give them 60 second to build or form that item using the blocks provided.
- Team will have to guess what they are building or forming.
- After 60 seconds, if they do not guess the clue the opposing team has the chance to "steal" with one guess!

Rules:
- Up front player can not say anything or make any noise, they are allowed to "act out" something to go along with their creation, similar to charades rules. They must build something though.
- Creations do not have to be "stand alone" creations. The up front play can hold their creation together if needed
- Letters and numbers are not allowed.  Player can not spell out the clue.
- Teams can yell out answers and guesses.

Additional Ideas/Options:
- An alterative to wooden blocks could be Legos or other similar building toys
- For a larger group or setting, consider setting up a close circuit camera that also shows on overhead screen.