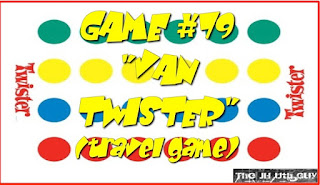 Here is a quick little "TWIST" on the classic game while traveling in your super cool swagger wagon 15 passenger church van to your next youth group shin-ding!?

It is "twisted" youth pastor fun to watch and to get pictures of!!

Game Explanation/Play:
Simple explanation: Students will be playing the classic game of "Twister using what is reachable while seated in a 12 or 15 passenger van.

Game Play:
- Have everyone seated in the van
- Announce either "right" or "left" and either "hand" or "foot"
- Then announce something that has be touched
- Continue to play until players can not "twist" to touch the assigned item and say "out"/

Advanced Play:
- For a Round 2/Challenge Round change it from the usual "hand" & "foot" and do "elbow", "knee", "forehead", "nose" or whatever your twisted youth leader mind desires.
- Also for Round 2/Challenge Round you could also include other people as suggested APPROPRIATE "touches" (person next to you's ear, nose, eyeball, knee, back....)

Be safe have fun. Do not get pulled over while playing, you might have some explaining to try to do!