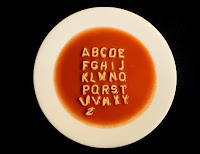 As an up-front face-off, a small group challenge or even a big group relay race.

Set-Up and Rules:
Upfront Version: Using 4-6 cans of soup dump 2-3 cans of soup into 2 large bowls. Cover the tables with white paper. Place the bowls on the table along with a spoon for each.

Have either 2 players come up for a one-on-one challenge or have 4 players and have a partner challenge. On "Go! " players using the spoons must soup out the alphabet noodles and try to spell as many words as they can in a set amount of time.

Small Group Version: For each small group/small team have a large bowl containing 4-5 cans of soup.  Provide each team 2 spoons and a large piece of white roll paper on either a table or laying on the floor.

On "Go!" 2 players must soup out as many alphabet noodles as they can find providing the rest of the group an opportunity to spell as many words as they can in set amount of time.

Relay Race/Big Group Version: Divide your entire group up into 2 teams (or more for larger groups) line them "relay style" on the far end of the playing area.  On the other end have a extra large mixing bowl or similar container for each team containing 6-8 cans of soup.   Assign each team a couple designated "spellers' off to one side with a large piece of white roll paper on the floor or on a table.
Provide the first person in each line a small tea spoon size spoon.

On "Go!" each player will run to the far end and soup out ONLY ONE letter and then run it back to their team's speller. Continue the game regular relay race style until even person has gone, or if you like run the group through more than once.   Once again the group that has spelled the most words wins.!

Hints/Helps:
- For a less sloppy version of all the above games, use Alpha-Bit cereal.  We use this version as part of our "Cereal Bowl Night"

- For a far more sloppy, slightly grosser version of the up-front game, don't use spoons but just do the old "slurp and spit"!!