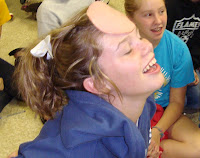 Another Slightly Disgusting....Quick Simple, Inexpensive Up-Front Challenge, That Your MS/JH Students Will *Love! (*watching others do...)


Supplies:
- 1 big package of bologna (cheapest you can find)

Rules/Set Up/Game:
Have 2 teams of 2 come up.  The teams stand 10-15 feet away from each other.  Hand all 4 players an equal amount of slices of Bologna.

On "Go" players will take turns "Frisbee" throwing a slice of bologna to their team mate who will try to catch it with their face, without using their hands. The game goes back and forth until every one is out of Bologna.  The winning team is the team that has the most bologna on their faces.

The challenge and trick of course after the first couple of "catches" is for players to keep the Bologna on their face and continue to throw. It is hilarious to see people trying to peek out from underneath a slice of slimy gross Bologna trying to throw with any accuracy.

Enjoy, have fun and hope your students like it as much as mine do!