News U Can Use: "Young Men Turning to FortNite for Mental Health Help?" 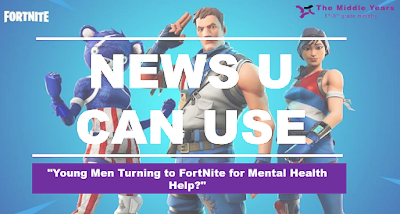 "Joshua woke up one morning two years ago with excruciating nausea. “It was waking me up at 4 or 5 in the morning,” the 16-year-old tells MEL. “The first time, it [went on for] like 34 days straight.” He was ill on and off for a year and a half. “I’d be sick for weeks at a time, and I couldn’t go to school for the first half of the day because I’d be sick.”
Doctors weren’t sure what was causing it. Finally, a pediatrician offered an explanation: anxiety. Feeling isolated, Joshua (a pseudonym) soon snowballed into depression. “At night, I would get to this super-low point,” he says. “I didn’t want to wake up the next morning and go through that whole sickness again.”
The only thing that made Joshua happy during this time was the video game Fortnite, the smash-hit online first-person shooter. “I would take [an anti-nausea medication] in the morning, and then I’d play all day until probably 11, 12 at night,” he says. Fortnite sated Joshua’s need for a distraction from his constant sickness. He calls it his only outlet. “When you play video games, you’re forced to think about other stuff"