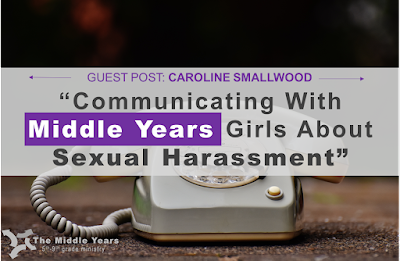 “Inappropriate sexual conduct” was the cause for Matt Lauer’s recent dismissal from the Today Show. In just a few weeks surrounding that event, the number of reported cases of sexual harassment was high, mostly in the workplace. If women are dealing with this as adults, in monitored places, then we can only expect students to fight the same battle in their over-crowded, teen-boy-filled schools. How is a 12,13,14 year old supposed to say no or fight back when they feel uncomfortable or sense that they are in an inappropriate situation? And, more importantly, how do we as youth leaders teach and empower them to do so?

First, I’d like to note that sexual harassment and inappropriate behavior can and do come from both genders and all ages, but this article will address how to help a middle school girl through an inappropriate situation brought on by a male her same age.

That being said, there are three things we should start communicating to students about sexual harassment.

1. You have the authority, right and freedom to say no.

It is critical that before a student gets in a situation they know that it is their right to say no. That their voice matters and has power. They need to be prepared to use their power to speak up when they feel uncomfortable. So, how can we help?

Tell them how to say no: with authority. Make sure they are aware that no means no and a guy should listen the first time.

Tell them when to say no: as soon as they feel uncomfortable. Don’t wait to see if it stops or gets better, tell someone right away.

Tell them who to tell: teachers, church leaders, and always their parents. Telling a friend is okay and can even be good but it is not enough. A trusted adult needs to know.

I think we would all be surprised how often middle school girls are needing to stand up for themselves these days. Because of the frequency of these inappropriate behaviors, students could begin to feel that it isn’t as serious as it truly is. That being said, it does not have to be a “severe” action to make it worth telling someone. It doesn’t have to fit some guidelines or be some awful, unheard of action. The offended girl gets to decide what is uncomfortable for her. So, it may not seem like a big deal to somebody else, but if it’s a big deal to them then it is valid.

“Did you flirt with him first?” “What were you wearing?” These are poor questions, yet commonly used, to ask students when they first tell you about sexual harassment or inappropriate behavior. These questions, whether they intend to or not, portray the idea that it was somehow the girl’s fault.

That being said, before you jump to conclusions, listen to the whole story. Remember that there are always two sides to the story and both parties deserve to be heard. If a boy did indeed do something inappropriate, we know he needs love and support as opposed to bashing and blame. When in doubt, always speak truth in love.

Caroline Smallwood is the Middle School Girls’ Director at Christ Chapel Bible Church in Fort Worth, Texas. At a young age she knew she was called to work with middle year girls and has been doing so in a full-time role for four years. She has her Masters in Human Relations and has a passion for helping hurting kids.