News U Can Use: “Strangers Things 2, Starring Middle Years Kids” 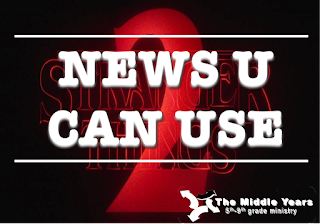 In case you have been living under a rock, Middle Years students are ruling Netflix, Pop Culture and “TV” AGAIN, With the Arrival of Stranger Things 2...


“ At the downtown Atlanta bar where I watched the 2017 Super Bowl, the only cheer that did not retroactively mutate into a painfully misguided croak of hubris was the one that erupted during a third-quarter commercial break, when a trio of very famous tweens appeared in Ghostbusters costumes. Stranger Things, the little-hyped Netflix nostalgia-shot-turned-summer-phenomenon, was back.

Netflix’s first Super Bowl spot, which cost an estimated $5 million, was ostensibly placed to announce the show would be returning on Halloween (the date was later bumped up to October 27). But there’s no doubt that the big spend was also meant to cement Stranger Things’ status as a hit show. When Netflix later managed to license “Thriller” for a second trailer that debuted at Comic-Con in July, the message was clear: Stranger Things 2 would be not only a show but a cultural event, on par with the biggest movies and TV programs of our time, and a worthy successor to the most iconic artifacts from the decade it so lovingly captures.

There’s just one small problem with this narrative. No one except the people at Netflix know exactly how many subscribers watched Stranger Things. For years the company has famously refused to disclose any consistent viewership data about its shows, arguing that such information is relevant only to companies that need to sell advertising against their programming. Though Netflix claims to be an extremely data-driven company, those on the outside, from Hollywood producers to critics to viewers, must rely on the elusive notion of “buzz” to figure out whether a show is popular. That’s bad for anyone trying to understand the complex moving parts of the TV industry, but good for a show like Stranger Things, which will be publicly hailed as a success no matter how many people tune in...”  READ MORE AT “THE RINGER”