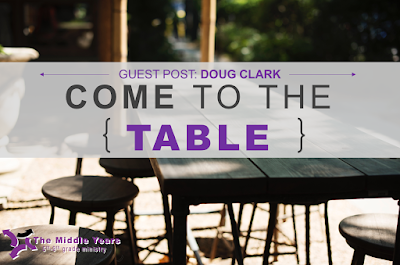 When you spend time at the table with someone, relationships change.

In From Tablet to Table, author Len Sweet recounts the rivalry between basketball greats Magic Johnson and Larry Bird. From opponents in high school to their NBA days playing for rivals L.A. Lakers and Boston Celtics, they were not only competitors, but truly disliked each other.

Until one day, a table changed that.

Converse hired the two as co-stars in a shoe commercial. The shoot was scheduled for Bird's family farm in Indiana. It was awkward until they broke for lunch, and everyone was invited to the table. Larry Bird later said, "It was at the table that I discovered Earvin Johnson. I never liked Magic Johnson very much. But Earvin I like, a lot. And Earvin didn't come out until I met him at Mom's table.”

Len Sweet concluded: "That's the power of the table. We lower our guard as we break bread together; we become ourselves, and we become open to one another. We cease being rivals, enemies; and we begin to experience companionship, friendship.”

The "table" can happen through a network.

At a network, "Magic" becomes "Earvin." "Baptists" and "Pentecostals" find out they are really playing for the same team. Relationships eat boundaries for breakfast.

We’ve had enough division; isn’t it time for a season of cooperation? As a youth leader, connect with others in your community and unite behind student leaders. Be the answer to Jesus’ prayer in John 17:20-23. Then, do it some more.

“I don’t have time for another meeting,” you might say. But consider two numbers: 3.9 and 9.2. Research tells us that the average youth pastor changes positions every 3.9 years. However, a NNYM survey shows that a youth pastor who is actively involved in a local network averages 9.2 years.
You may not need another meeting, but it’s highly likely that there is someone in your community who’s about to quit. They might need you, even a cup of coffee and someone to encourage them.
You might not need another meeting, but your students and their friends will notice when their youth leaders love each other and work together to help them as they stand for Christ at school.

So, for all the right reasons, network with other leaders. Pray together. Build relationships. Develop a strategy that reaches more kids collaboratively than you could reach individually. Ask God to provide the resources to make it happen.

Wouldn’t this be fun: be around long enough to see your current middle school students have their kids in your youth group.

Gather your network at a table somewhere and see what God would have you do.

Doug Clark is the National Field Director for NNYM and is passionate about working together. His favorite students are middle schoolers.