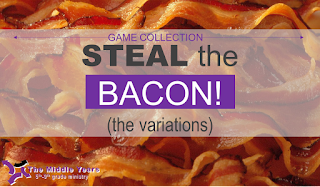 A Classic Game With Some SIZZLING and Silly New Youth Group Twists!

The object of Steal the Bacon is to take the "bacon" back to your own side without being caught. In this game, two teams are chosen, An object is required to the bacon. (beanbag, rag, eraser ...) The members of each team are numbered. They form two opposing lines and place the bacon in the exact center of playing space. The leader then calls out a number. The players on each side who are assigned that number are the players for that round. They must run out and try to get the "Bacon" Neither player may touch the other until someone touches the bacon. Once a player touches the bacon however, the other player may tag him/her. If a player is able to grab the bacon and carry it back over to his/her own side, that team scores a point.