News U Can Use: Parents Tweak Outdated Screen Time Rules" 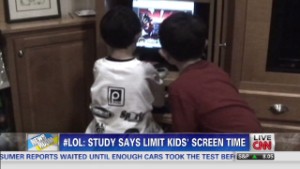 There are plenty of I-know-this-is-probably-not-a-good-idea moments as a parent -- those times when you let your child do something or eat something or play something that you think might not be the healthiest way to go.

Letting my then 19-month-old toddler watch television was one of those moments for me. As a reporter, I had done stories on kids and screen time and was well aware that the American Academy of Pediatrics discouraged screen time for babies under 2. But trying to nurse an infant while keeping a toddler entertained proved to be too much of a challenge at times. So while I tried my hardest to wait until my daughter was 2 before she met "Dora the Explorer" and "Doc McStuffins," I gave in and felt guilty about it, I might add.
But now comes word that I, and other parents, no longer should carry around such guilt about screen time because pediatricians are tweaking their long-standing recommendation for children younger than 2, as well as the recommendation that older children and teens get no more than two hours of recreational screen time a day.

New screen rules for babies and kids 03:03"Look at our world. It has changed ... and so we have to approach the world as it is and figure out ways to make it work," said Dr. Ari Brown, chairman of the American Academy of Pediatrics' group investigating media use and children and co-author of a recent piece published by the American Academy of Pediatrics titled "Beyond 'turn it off': How to advise families on media use."....
READ MORE AT CNN  (http://www.cnn.com/2015/10/06/health/screen-time-rules-change-pediatricians/index.htmll)