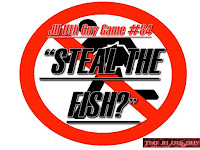 If You Love Steal the Bacon and Dodgeball, Then You Might Just Get "Hooked" on  STEAL THE FISH?

Just a bit of Fun that is also a Little Bit "Fishy"?

BASED ON CLASSIC "STEAL THE BACON" GAME AND RULES:
The object of Steal the Bacon is to take the "bacon" back to your own side without being caught. In this game, two teams are chosen, An object is required to the bacon. (beanbag, rag, eraser ...) The members of each team are numbered. They form two opposing lines and place the bacon in the exact center of playing space. The leader then calls out a number. The players on each side who are assigned that number are the players for that round. They must run out and try to get the "Bacon" Neither player may touch the other until someone touches the bacon. Once a player touches the bacon however, the other player may tag him/her. If a player is able to grab the bacon and carry it back over to his/her own side, that team scores a point.- From Games Kids Play.
Supplies:
- Kiddie Pool
- A Large Package of Breaded Fish Sticks
- 2-3 Dodgeballs
Set Up:
- Place a kiddie pool in the center of a playing area (inside or outside).
- Empty all a package of fish sticks into the pool
- Place 2-3 dodge balls into the pool
- Mark off 2-4 team areas and end lines
* Filling the pool with water is optional, depending if you are inside or outside?
Basic Rules/Explanation:
Simple Explanation: A member from each team must be the first person to the center of the room, steal a fish stick and get it back to their team's side without getting hit with a dodgeball!

Game Set Up
- Divide everyone up into 2-4 equal teams
- Send them to their team area and have them line up
- Assign each person on teach team a number, similar to "steal the bacon"
- Have everyone stay lined up according to number

Game Play
- Each round announce a single number
- Players from each team with that assigned number must run out and either steal the fish or attempt to hit the player with the fish with a dodgeball before they can make it back to their side
- As game progresses, start announcing more than one number to make it more fun and challenging.

Have Fun, Enjoy.  Make Up Your Own "House Rules"! 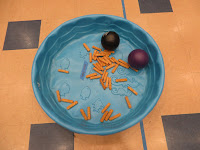