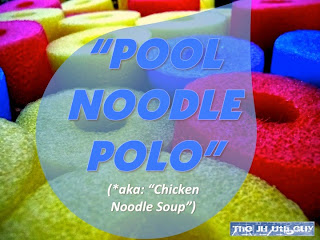 Rules and Game Explanation:
The simple explanation: it is he old game of "Pool Chicken Fight" meets the game of "Equestrian Polo".

Set up & Play
- Divide into two teams and then have everyone pair up.
- Have one person choose to be the "Horse" and the other the "Rider" or assume "Chicken Fight" positions.
-  Have each team go to opposite ends of the pool/playing area.
-  Set up a goal at each end or simply have the each end wall be the goal.
-  Hand each rider a pool noodle.
-  Set the ball in the center of the playing area or at "Go" throw it out into the pool

The Rules
- the players must hit the ball using only their pool noodle to score a goal
- No hands or body parts are allowed to hit the ball
- You can decide if you would like to allow pushing and knocking other players off into the water- that is where the "Chicken Fight" element comes in.

*DRY LAND ALTERNATIVE :
In your indoor playing area (gym...) or even on an outdoor playing area. Play "PIGGY BACK POOL NOODLE POLO". Similar rules and idea as above. Using a light ball/beach ball and pool noodles have a goal set up at each end of your playing area. The biggest obvious difference for safety is riders will be riding piggy-back style instead of on someone's shoulders!

* NOTE: In a gym setting we have sometimes replaced the pool noodle with hockey sticks but still used a beach ball!!