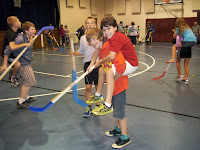 Here is another wild and fun game that my MS/JH group loves.  It just a quick twist on a classic youth group game, that will be sure to create some memories and laughs!

Setup
Set up your playing around indoor or outdoors like a normal hockey field (field hockey, street hockey)- 2 goals at either end, etc...
Divide your group up into teams- 2 teams for a smaller group, more teams for a larger group. Once everyone has a team, then have everyone pair up with a friend, preferably with some of the same gender.   Have each pair get one hockey stick for them to use.  One player will be the horse, the other player will be the rider.  The rider will be the one who has the stick.  The rider will be riding piggy back on his partner's back.

Play/Rules
Basically you are playing a regular game of hockey, minus the pushing, body checks and fighting...hopefully?   Start the game with both teams at the far end of each side of the playing area, place your ball at the center.  On "go" everyone runs to the ball and begins to play, pass, and shoot their way to a goal.  After each goal have everyone start again at the end lines and switch around so that the rider is now the horse, giving the horse a break.

Hints/Help
- As mentioned above have player partner up with people of the same gender, just to keep everything appropriate.  Maybe even consider a girls vs. boys game?
- Strongly enforce the no pushing, shoving rule as much as you can, to keep everyone safe.
- Instead of use a small ball, consider using a slightly larger light ball, like a dodgeball or even a grocery store playball, to keep things fun and slow down the game a bit. 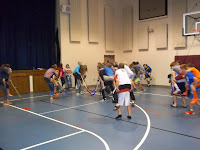 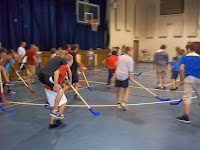