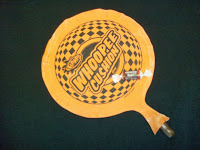 Supplies:
- 2 Whoopee Cushions
- 6 Small Tootsie Rolls
- 2 Chairs
Set Up:
Unwrap all 6 tootsie rolls and then mold them  into a longer "poop" shape.  Insert the first 2 tootsie rolls into the end of each whoopee inflated cushion.  Place the 2 chairs it the front of your room/space/stage.  Face the chair away from the crowd. Place a whoopee cushion facing the crowd/group, so that the tootsie roll is shooting out toward the crowd.
Call up 2 volunteers to be your "shooters".
Rules/Play:
Taking turns each player will sit down as hard as they can on their assigned chair and whoopee cushion.   They will be trying to shoot the tootsie roll as far as they can.   The player with the longest distance after 3 turns will be the winner.
As you can imagine this is a big hit and hilarious based the sound and visual of the game.
Hints/Help:
- Prize Suggestion: consider reward the winner with a "Big Ripper"/Mega Cushion" or a Large can of baked beans.
- The self inflating whoopee cushions work really well, as you or a helper will have to re-inflated and put a new tootsie roll each turn.
- Do not push the tootsie roll in too far into the whoopee cushion, I would suggest just about half way (see photo above)