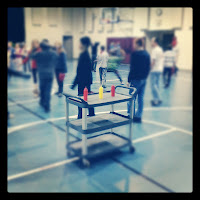 Here a quick little group game to play to go along with "A CHEESEBURGER NIGHT" and/or the lesson "NO MORE CHEESY CHRISTIANS" that I posted yesterday. It is a game similar to my "Sink Battle Ship" game. It was a huge hit with the group on our cheeseburger night that we did a few weeks back.

Supplies:
- 6 fast food style ketchup and mustard squeeze bottles
- 4 rubber hamburger dog toys
- 2 small rolling kitchen carts or 2 small tables
- 2 different color bandanas enough to identify teams
Set Up:
- Game Area: indoor or outdoor area large enough space for your group to have 2 large teams and be able spread out and run.  Divide the area in half, marking off the center line however you like make to defined “team territories”, similar to “capture the flag”.  On the far end of each playing area have your kitchen cart/table with your 3 squeeze bottles standing up and spread out at an equal distance.

- Teams:  divide your whole group into 2 big teams and assign them a territory.

- Game Play/Rules:
The game is played similar to “capture the flag” with 2 teams battling to get into each other’s area without being “tagged”.   The difference in this game is instead of “capturing” you are trying instead to “destroy”.
Each team will battle to get into the opposing team’s territory with a hamburger, using it to knock over one the squeeze bottles, while also trying to defend their own bottles.   First team to knock over all 3 of the other team’s bottles wins.
- There is no jail in this game.  If a play is in the opposing team’s territory and gets “tagged” (2 hands) they simply give up the hamburger to the person who tagged them and return to their own side.  -  Hamburgers may be passed, or used to score.  Once a hamburger hits the ground in the opposing teams territory it changes possession.

*As always continue to check out the "GAMES" tab above to see the ever growing list of games!