The whole Angry Birds thing is quickly fading. Everyone has been doing the "Angry Birds Live" thing as well at youth group this year. The Original from"Stuff You Can Use" is still the best!! I have even done a lesson "Angry Words" to go along with the game! The question is what to you do with all the stuff now that your group has been-there-done-that. Here are some quick easy suggestions for new games using your Angry Bird supplies: 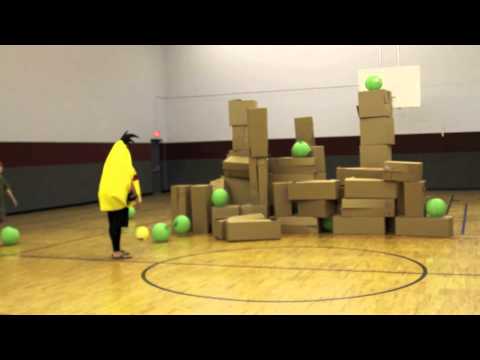 Ultimate Birds:
Use your cardboard boxes and your "pigs". The only additional new supply that you need to purchase is an "Angry Bird" Frisbee, found at Wal-mart and variety of other stores, or make your own using a red Frisbee. Simple set up by making 2 "castles" at each end of your playing area and setting up half of your pigs on each.

The rules are the basic rules of "Ultimate Frisbee" but with goal at the end of each playing area is to knock down the "pigs".

Battle Birds:
This is a dodgeball version of angry birds, using all of your Angry Bird Live supplies, including your "Bird Balls" you have created or purchased. Same set up as "Ultimate Birds" above with 2 sets of castles and pigs at each end.


All the basic rules are the same as dodgeball--no one past the middle line, getting people out, catching the opposing teams throw, ect.. The new addition to the game of course is trying to be the first team to get the other teams "pigs" knocked down.

Water Birds:
Water Birds is the summer update for using your supplies. The additional supplies you will need is a second sling shot and a lot of red water balloons. The set up once again is similar to the 2 games above, with two teams, two castles and sets of pigs. This time however you will be setting up your teams behind the castle & pigs, so I would suggest building it a lower.

The basic rules and game is that each team will be taking turns shooting red water balloon "birds" over their own castle walls to the other teams castle and pigs. The first team to destroy and knock down the other teams walls and pigs wins. Good clean, wet fun! Your boxes however may be finished after this game.

* BONUS: Angry Leaders:
Place leaders on one end of your playing area standing up on chairs, stools, tables or something similar. Using your Angry Bird balls and slingshot to have teams alternate and try to hit and knock down leaders. Points for hits, extra points for knock offs and points deducted if leader catches the ball. Sure to make your leaders "Angry"?

As always hope this helps and Enjoy!