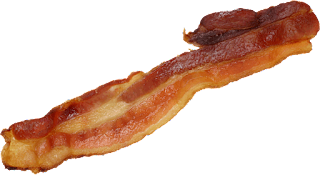 CLASSIC GAME AND RULES:The object of Steal the Bacon is to take the "bacon" back to your own side without being caught. In this game, two teams are chosen, An object is required to the bacon. (beanbag, rag, eraser ...) The members of each team are numbered. They form two opposing lines and place the bacon in the exact center of playing space. The leader then calls out a number. The players on each side who are assigned that number are the players for that round. They must run out and try to get the "Bacon" Neither player may touch the other until someone touches the bacon. Once a player touches the bacon however, the other player may tag him/her. If a player is able to grab the bacon and carry it back over to his/her own side, that team scores a point.- From  Games Kids Play. 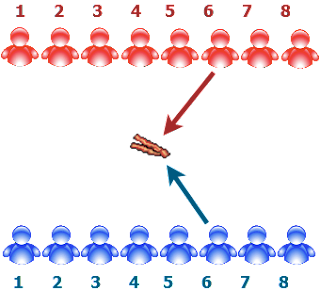 STEAL THE LEADER (or 6th Grader)
Teams line up on either side of the playing area (gym, room, field..). A leaders or a 6th grader, (one person for each team) is placed in the center. When the player's # is yelled the player must run to the center and pick up the "bacon" person and run them back to their team or to a "goal" location.  No tagging is involved in this version it is a pure race. If a players cannot pick the "bacon" up can they can try to drag them back.  In the leader version of this game you may need to call 2 numbers or even 4 numbers at a time.  The bigger the leader the more the fun!!  For the 6th grade version a smaller student is usually the best way to go!
- This version can be played with more than 2 teams


BIG BALL SOCCER
Same basic rules as the classic game and once again to no tagging is involved in this version.  The "bacon" in this case is a Big Soccer Ball (available at walmart, cheap).  You can also use a earth ball or an exercise ball.  The ball is placed in the center, when the player(s) number is called they run out and start a quick game of soccer to get the ball into a goal, across the end line or even to get to touch the "team wall" if played indoors.  Like the above version feel free to call more than one number at a time.  When we play, the last round is the "Battle Round", where I yell "everybody" and it turns into old school chaos. WARNING: people may get hurt...?
- This version is best place with 2-4 teams.

TUNNEL RATS:
In this version each team lines up in a single file line facing forward toward the center.   You can have the teams line up side by side or face in toward each other.  When played in a gym you could have the first person of each line standing on the center court circle.  When the player's # is yelled, the team must spread their legs creating a tunnel, the player then must crawl like a rat through the tunnel and out and be the first person to grab the "bacon".  In this version you can tag, or you can simply make it a race.  For a more challenging version you can have 2 or more "bacons" available, and call out a second # a few seconds after the first.
- This version can be played with more then 2 teams


FULL POGO JOUSTING
In this version the player runs out to a "pogo ball" and a "pool noodle" placed in the center of the playing area. They then must hop toward the opposing player and be the first one to tag the other player with the pool noodle. Obviously the "tag" is the point of the game and the scoring for the game
- This version is best played with just 2 teams.

DODGEBALL (BACON) SHOWDOWN
Similar to the "Pogo Jousting", the player runs out to the center to get a dodgeball and be the first person to hit the opposing player (s).  This version is additionally fun, when taken to the next level and in fact REAL strips of raw bacon are used and are being dodged and thrown!!
- This version can be be played with more then 2 teams